Open Space Canyons are located throughout the City of San Diego and you may find one just beyond your own backyard. A map is available for locating a canyon close to you. Trail maps are also available for exploring what is right in your own community. 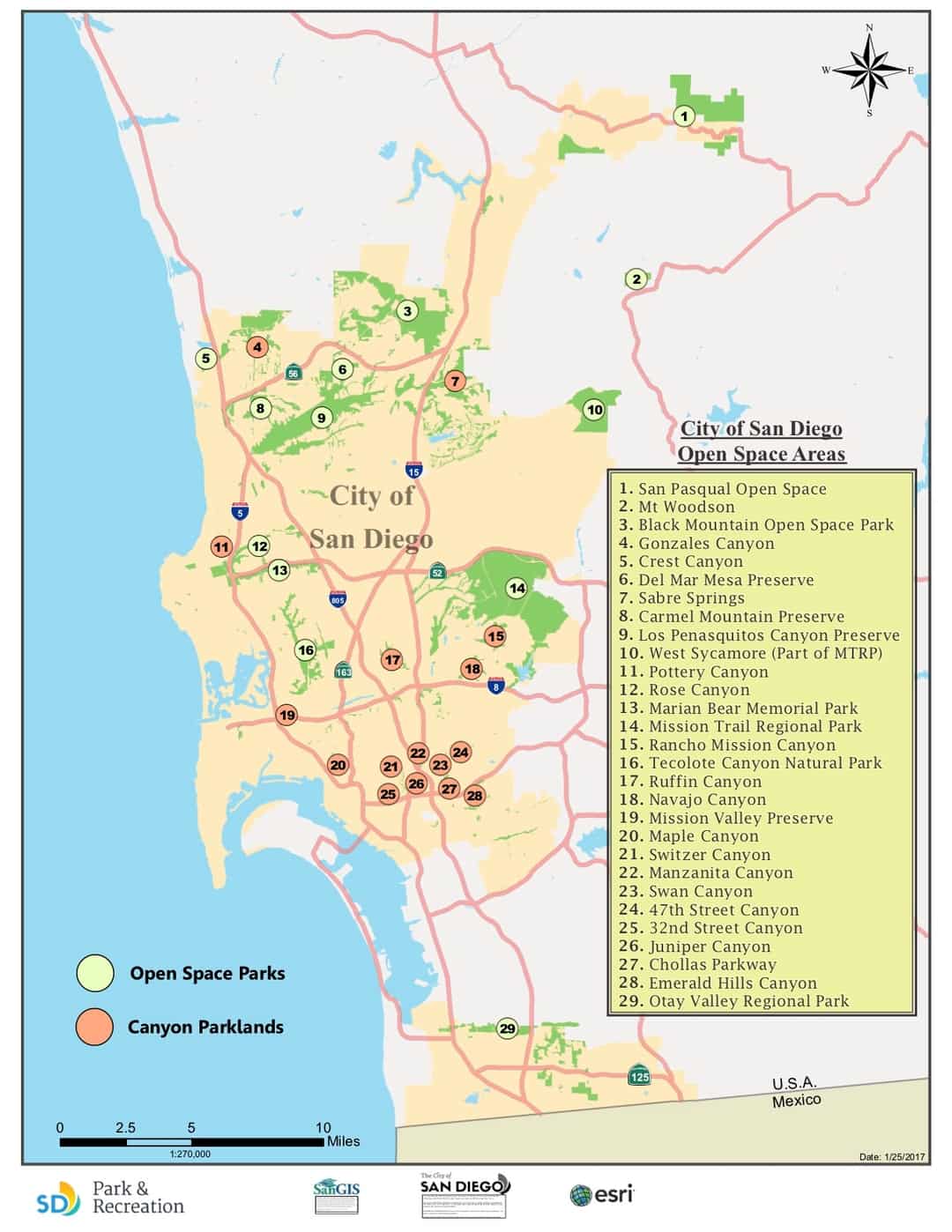 This urban park, just minutes away from downtown San Diego, is also renowned for its brilliant displays of seasonal flowers, shady groves of trees and meandering paths through rolling lawns. Balboa Park is managed and maintained by the Developed Regional Parks Division of the City of San Diego Park & Recreation Department.

Many of the museums along Balboa Park's Prado are housed in magnificent Spanish Colonial Revival buildings, originally constructed for the 1915-1916 Panama-California Exposition. It was the first time that this richly decorated, highly ornamental architectural style had ever been used in the United States.

The rich ethnic diversity of San Diego is reflected in the Park's institutions:

Centro Cultural de la Raza
World Beat Center (celebrating cultures of African origins)
San Diego Museum of Us anthropological museum
Mingei International Museum (currently closed for renovation)
‍Japanese Friendship Garden
House of Pacific Relations - 17 cottages that are home to groups of diverse national origin.
‍
Balboa Park's sports complex is named after John Morley, who was Park Superintendent from 1911-1939, years that encompassed two international expositions that were so crucial to the development of the park. The facilities at Morley Field include USTA-awarded tennis courts, a velodrome (bicycle track) where masters world cup championships are held, a swimming pool and a disc golf course.

Balboa Park also offers many family play and picnic areas, three leash-free dog parks, lawn bowling, canyon trails for hiking, and a golf course.
Mission Bay Park is the largest aquatic park of its kind in the country. It consists of over 4,235 acres in roughly equal parts land and water. Mission Bay boasts 27 miles of shoreline, 19 of which are sandy beaches with eight locations designated as official swimming areas.

Annual attendance in the park is estimated at 15 million.

At the west end is a network of channels and islands - a perfect spot for everyone from windsurfers to water- skiers. You can swim, enjoy the sun or rent a boat to explore the thousands of acres of waterways.

Mission Bay Park offers boat docks and launching facilities, sailboat and motor rentals, bike and walk paths, basketball courts and playgrounds for children. It is one of San Diego's most fun-filled spots to visit.

Many people prefer to stay on shore and spend their leisure picnicking, riding a bike along the paths, playing volleyball, or flying a kite. There are close to 14 miles of bike paths along Mission Bay.

Public restrooms and showers are available and lifeguard stations are located in designated areas.
Located on the site of San Diego's original Spanish presidio and mission, this park offers over 50 acres nestled on a hill over looking Mission Bay, San Diego Bay, Mission Valley and the Pacific Ocean. The Serra Museumeducates and excites visitors with the park history and San Diego's past. Presidio Park is a horticultural cornucopia, flourishing with native and non-native species. All this can be observed exploring Presidio Parks more than 2 miles of trails, situated in the middle of urban San Diego. The Old Presidio Historical Trail is a self guided walk that begins on the corner of Juan and Mason streets and then crosses over Jackson Street to continue the walk from the corner of Mason and Jackson streets. The trail has a moderate level of difficulty and isthat ask and answer historical questions about the park along the way.